Data Visualisation has always been one of Majestic’s passions, so when faced with the open-ended brief “Use the D3 library to showcase what Majestic do”, it would come across as a mammoth task for many a programmer – let alone one that had just started. This was the position that Sam, Christoph and I were in just six weeks ago…

As the current summer interns, we decided to draw on inspiration from the work of our counterparts from last year. Having seen the Social Explorer that last year’s interns produced, we decided to start work on a similar visualisation that took the same tack, but applied it to backlinking sites rather than Twitter accounts. The finished result, though functional, didn’t seem to really do justice to Majestic’s data. Sure, it displayed it, but as we soon found out it’s often not just about displaying the data, but also how you display it.

At this point, Christoph unfortunately had to leave, but we were all extremely grateful for everything that he contributed.

Despite losing one of our team, Sam and I were still determined to act on the advice that we were given, and represent the data in a new format – as a force-directed graph.

The force-directed graph approach made much more sense for a couple of reasons:

After weeks of experimenting with and playing around with the data, we are finally able to show you what we have been able to create. 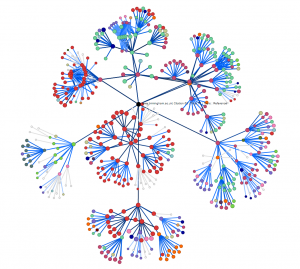 Page Link Network – What is it?

The page link network is brilliant not only for visualising how sites are linked together, but also for identifying the source(s) of a site’s trust flow. The line colour represents the Trust Flow of the backlinking site (the darker the blue, the higher the trust) so it is possible to identify clusters of high (or low) trust sites by simply looking at these colours. On the right, examples of low-trust clusters are circled in red and examples of high-trust clusters are circled in black. 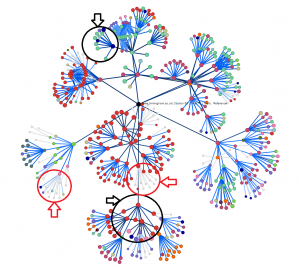 We would love you to try the tool for yourselves, so we have provided some data from sites of the following universities:

If you would like to try the tool out, head on over to the labs site, and navigate to the 2016 interns page using our snazzy new landing page!

We are planning on rolling out a few more updates in the next couple of weeks, so definitely keep your eyes peeled!