Domain migrations: watch out for the (internal) links!

Therefore, today’s article focuses on internal and external linking, using three anonymised cases as examples which we will discuss in detail. However, this article is not intended to cover all the subtleties of a migration. You can find very good articles and presentations worth reading on this topic here by Bastian, here by Alyda, here by Moz or here by Pratik, for example. This article aims to raise awareness for the importance of linking in the context of a relaunch.

From an SEO-perspective, internal linking has three essential functions:

The following three cases have occurred in practice in recent months.

Case 1: Missed redirection of the homepage and thus loss of >80% of the link juice

In this case, a partial migration of a web page was performed. This means that only certain directories were spun off from one domain to another. Other contents, as well as the homepage of the old domain, remained – for the time being – on the old domain for strategic reasons. The outsourced content was forwarded and transferred in a clean manner. From an SEO point of view, this technical part was well implemented.

Well performed migrations have shown us for some time that link juice, which was generated by backlinks with correct 301-forwardings can be passed on almost entirely without any losses. Correct forwardings, therefore, serve as an essential core mechanism for ranking inheritance. Of course, it also plays a role, in which directories and on which URLs the link juice was generated and whether URLs and directories were migrated. An analysis of the link data had subsequently shown that most of the link juice of domain A could be found on the homepage, which wasn’t migrated initially.

With the migration, directories with rich content but no (comparatively) powerful link juice were redirected. These directories worked better in the constellation before the migration, because they benefited from the strong Domain A homepage via an internal link(!), as the directories were included in the main navigation.

Although the links had been adapted during the migrations – domain A had linked the contents to domain B – one crucial thing apparently wasn’t considered: after the migration, the previously internal links within domain A became external links from domain A to domain B, including exact anchor texts. From an SEO perspective, the difference is obvious, as Google has to evaluate external links utterly different from internal links within the algorithm. After the migration less link juice was transferred through the navigation. Therefore, one can see a severe change of the link graph for both domains A and B.

Later it was decided that the homepage should also be forwarded and thus most of the link juice was transferred to domain B. Although the graphic of Searchmetrics (see above) shows that the visibility of both domains together almost reaches the pre-migration level, from an SEO perspective, lots of potential has been wasted due to the separation of content. When planning partial migrations, one should also analyse in detail how the external link force inheritance and internal linking changes.

Case 2: Partial migration and redesign of the global navigation

If one does not consider all the three aspects of internal linking mentioned earlier, the restructuring of a website can lead to massive and unanticipated changes, that can have a lasting negative impact on the ranking performance of a site.

The second case involves a partial migration of two domains to a third one. The contents of the domains C (small) & D (main domain) have been migrated to domain E. However, essential internal linking elements such as the main navigation, the prominent footer (see the figure below), thematic links on the category pages and the extensive pagination of Domain D, that had previously been played out domain-wide, were not adapted or changed. 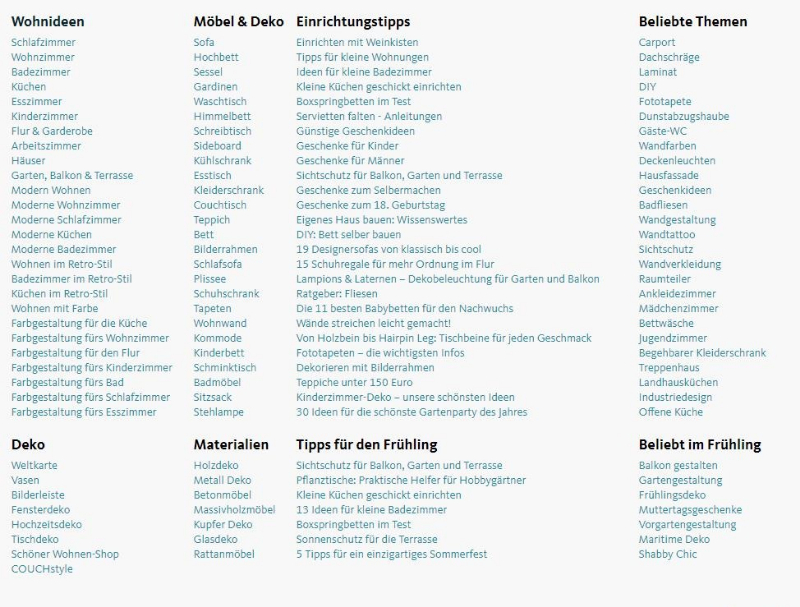 For SEO experts, this represents a massive interference in the internal linking of the information architecture of the website and a significant change in the prioritisation of landing pages, which ultimately had its consequences.

The fact that the visibility initially rose is quite interesting. However, one must also consider that from Google’s point of view it was now necessary to process and evaluate a total of three domains. Considering Gary Illyes’ statement that a full evaluation of a migration with new URLs can take up to three months (here), a delayed adverse development is less surprising.

Note: The internal linking alone is indeed not the cause, but it is undoubtedly a decisive point.

Instead of the previous link constructs, for example, a box was implemented on the start page, on which the most important landing pages are linked once.

For this purpose, an internal cross-linking system was set up between the topics, a kind of hashtag system similar to Pinterest. 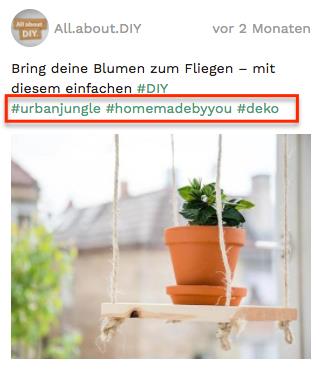 As a result of the migration, some of the backlinks seem to have been “lost”, since not all URLs were migrated and forwarded. A comparison of the intersections of the referring domains between domain E and the other two domains showed that a significant proportion of links, especially of domain D, no longer exists.

Not only the quantity but also the quality of the linked domains is of relevance. Some particularly strong domains that linked to the previous domain were not “relocated”, or their link strength was lost due to the migration.

Please pay attention when changing an internal link or corresponding modules. Changes can have severe effects on the performance of important landing pages. Also, do not carelessly “omit” URLs, always check these URLs for relevant incoming links, e.g. with the Majestic site explorer: https://majestic.com/reports/site-explorer or if there should be a few more URLs, use the Bulk Checker: https://majestic.com/reports/bulk-backlink-checker.

During this relaunch, the navigation was adapted as well. Instead of reducing it, however, as in other cases, it has been massively inflated. The previously existing link siloing was broken up, and the adjustments led to a massive change in the prioritisation of internally linked content.

It is self-evident that such massive changes have an impact on the performance. Admittedly, there are situations in which one cannot influence such decisions, but from an SEO point of view, such a shift of the internal linking and the distribution of the external linking within the framework of a migration should be classified as critical. Therefore, SEO experts should communicate the risks.

In the context of a domain migration, whether large or small, please always deal in detail with the topic of internal/external linking. Of course, there is a lot more to a successful migration than links alone, but this issue is often – wrongfully – underprioritised.

Ask yourself the following questions before you start working on a migration:

You should answer those questions first, to be able to pay special attention to your links during the migration process: when redesigning your website, always remember that you are – in most cases – not Amazon, Pinterest, Alibaba or Otto. Please don’t “blindly” imitate what you see there.

One final tip for all Majestic users:

Within the Majestic site-explorer you now also get information about outbound links, which is especially useful for the analysis of link profiles and migrations.