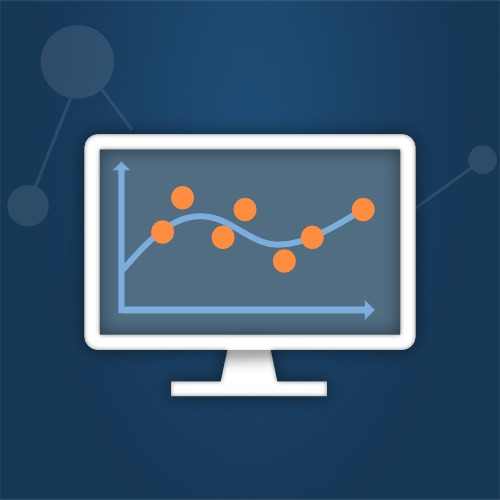 In this article, we will show how data transformations can be an important tool for the proper statistical analysis of data. The association, or correlation, between two variables can be visualised by creating a scatterplot of the data. In certain instances, it may appear that the relationship between the two variables is not linear; in such a case, a linear correlation analysis may still be appropriate. When performing a linear fit of Y against X, for example, an appropriate transformation X’ (of the variable X), Y’ (of the variable Y), or both, can often significantly improve the correlation. A residual plot can reveal whether a data set follows a random pattern, or if a nonlinear relationship can be detected. In such cases, it is often possible to “transform” the raw data to make it more linear. This allows us to use linear correlation techniques more effectively with nonlinear data. Transformations can often significantly improve a fit between X and Y. In other words, if the scatterplot of the raw data (X, Y) looks like that shown in Figure 1 (a), it may be possible to apply a transformation (X’, Y’) to the data so that the scatterplot looks more like that displayed in Figure 1 (b).

Figure 1 (a) Raw Data and (b) Transformed Data

The main focus of this article will be on the study of special types of transformations to achieve linearity. These are nonlinear transformations that increase the linear relationship between two variables. We will apply the methodology to a real-world problem, where we compare correlations between the online popularity rankings of the most visited websites provided by Ranking.com, and the corresponding MajesticSEO Trust Flow metric.

Data transformation essentially entails the application of a mathematical function to change the measurement scale of a variable that optimizes the linear correlation between the data. The function is applied to each point in a data set — that is, each data point yi is replaced with the transformed value

Where f is a function. In general, two kinds of transformations can be found in the literature:

This method is known as the Exponential model.

2. If the trend in the data follows the pattern shown in Figure 3 (a), we could take the square root of y to get y’=√y.

This transformation is known as the Quadratic model.

3. A trend in the raw data as shown in Figure 4 (a) would suggest a reciprocal transformation, i.e. y’=1/y.

This is the Reciprocal model.

4. If the raw data follows a trend as shown in Figure 5 (a), a logarithmic transformation can be applied to the independent variable x: x’ = log(x).

This is known as the Logarithmic model.

5. This method is often referred to as the Power model of data transformation.

Where X is the variable being transformed and λ is referred to as the transformation parameter. To avoid problems in the case λ = 0, the natural logarithm of X is taken instead of using the above expression.

The Box-Cox linearity plot is a plot of the correlation between the dependent variable Y and the transformed independent variable X for given values of λ, as shown in Figure 7. That is, values of λ are plotted along the horizontal axis, and the values of the correlation between Y and the transformed variable X’ are plotted along the vertical axis of the plot.

The optimal value of λ is then the value of λ corresponding to the maximum correlation (or minimum for negative correlation) on the plot. It is hoped that transforming X can provide a sizeable improvement to the fit. The Box-Cox transformation can also be applied to the Y variable, but this aspect will not be discussed here. One of the advantages of the he Box-Cox linearity plot is that it provides a convenient methodology to determine an appropriate transformation without involving a lot of alternative testing and elimination of failures.

We are now in a position to apply the data transformation techniques described above to real-world data. For the purposes of this study, we use the ranking of domains provided by Ranking.com (as determined by the amount of links on other websites on the Internet that point to a particular website or online property), and the proprietary MajesticSEO Trust Flow metric, to establish if there is a correlation between the two, and what transformations are necessary to improve this fit. We used the top 500 ranked sites, and used those sites for which a value of the MajesticSEO Trust Flow was available. After filtering the data, there were 467 sites in the final sample.

Figure 8 shows a plot of the data. The links are plotted on a logarithmic axis, and the black solid line defines the exponential trend line. The Pearson correlation coefficient has a low value of 0.212. The values of the correlation coefficient were calculated using some of the transformations described above to see if any further improvements were possible. The results are summarized in the table shown in Figure 9 below:

Figure 9: Values for the Correlation Coefficient after Data Transformation

As the table in Figure 10 shows, the maximum correlation that can be achieved increases for all the cases considered. The Spearman Rank Correlation was left out of the computations because it does not make statistical sense to transform ranks. It is seen that the Exponential model can be made to match the Spearman Correlation Coefficient using the Box-Cox data transformation method.

It has been demonstrated that transforming a data set to enhance linearity can lead to significant improvements in the fit between two variables. This is a multi-step, trial-and-error process. Transformation of data is employed in a manner such that a nonlinear relationship can be transformed to a linear one. These processes also reduce the influence of unusual and extreme variable values, and thus make for more appropriate modelling.

In practice, though, these methods need to be assessed against the data on which they are operated in order to be certain that they result in an increase rather than a decrease in the linearity of the relationship. The efficacy of the transformation method used (exponential model, quadratic model, reciprocal model, etc.) depends on the features of the original data. The only way to determine which method is best is to try each and compare the results obtained (i.e., residual plots, correlation coefficients), as described above. Guidance regarding what data transformation to use, or whether a transform is necessary at all, should come from the particular statistical analysis to be performed, and that too after a rigorous evaluation to determine whether the data closely meets the assumptions of the statistical inference procedure that is to be applied.

Finally, it is worth mentioning that even though a statistical test has been performed on a transformed variable, such as the logarithm, it is in general not good practice to report a summary of the results in transformed units. Instead, the results should be “back-transformed”. This involves doing the opposite of the mathematical function that was used in the data transformation. For example, for the quadratic transformation, back-transforming is achieved by squaring the variable involved. It is very important that a “back transformation” equation is utilized to restore the dependent variable to its original, non-transformed measurement scale.