Getting creative with PR: Calm.com shows the way

Facing cutthroat competition in the wellness app space, Calm has been able to get ahead by earning links in many major news publications by getting creative with PR. Spokesman Peter Freedman recently sat down with our own Andrea Pretorian to share insights into Calm’s PR success.

The playing field for mobile apps these days is fiercely competitive, with the health and wellness industry leading the fight.

Despite this intense competition, meditation app Calm has been absolutely crushing it, landing repeat coverage in major publications including The Telegraph, The New York Times, Adweek, The Weekly Standard, CNBC, NBC News, Fox News, Fast Company, and the LA Times.

‘Sleep stories’ are an important part of Calm’s app and according to their website; they “…mix music, sound fx and incredible voice talent to help you drift into dreamland.”. A new sleep story added this year which was inspired by the new EU regulation on data privacy known as GDPR. Calm took an uninteresting topic GDPR and used it in an exciting campaign that resulted in heavy news pickup worldwide and dozens of local and syndicated pieces like Joseph Archer writing in The Telegraph, “This app will read out GDPR regulations to send you to sleep“: 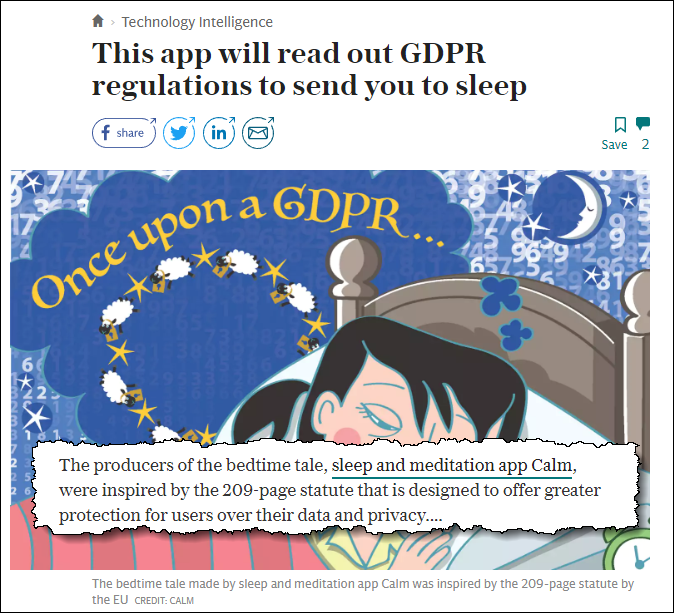 Finding media coverage like this is easy with Majestic. Here is how to do it – enter a domain, go to the topics tab then filter on ‘news’. 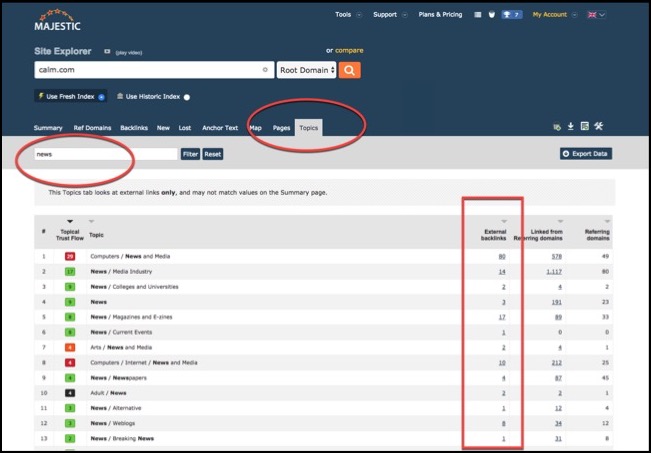 And click on this link and you’ll be taken right to the article and we’ll see the context of the editorial link: 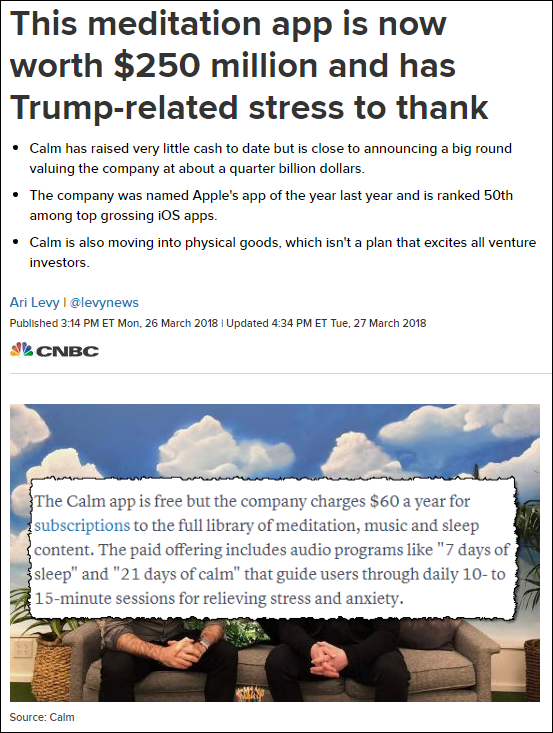 Check out our plans and pricing – big savings on annual subscriptions!

Every company is trying to find a way to differentiate itself and land its own share of loyal, paying users, and Calm is no exception. Each piece of coverage directly impacts the user base and contributes to the company’s bottom line.

Calm has organized their ideas into a two-pronged approach for media coverage, one for each of the two primary types of audiences: those who respond best to factual, product-led stories, and those compelled by more ‘playful’ ideas.

“The two different approaches are both vital. They complement each other and together add up to more than their sum of their parts.”

By weaving these two approaches together to varying extents in every piece of coverage, Calm is able to consistently appeal to the public and earn PR links.

Great stories can come from your own customers

With as much as one-third of the U.S. population suffering from insomnia and even more facing sleep problems, Calm had a hunch that getting a good night’s rest is a sensitive subject. Their users are focused on mindfulness, and disrupted sleep is both a cause and symptoms of a lack of mindfulness in daily life.

But Calm didn’t want to lecture the public on their health. They needed to bring it up more naturally. They realized that great stories can come from your own customers, as this coverage in USA Today shows. 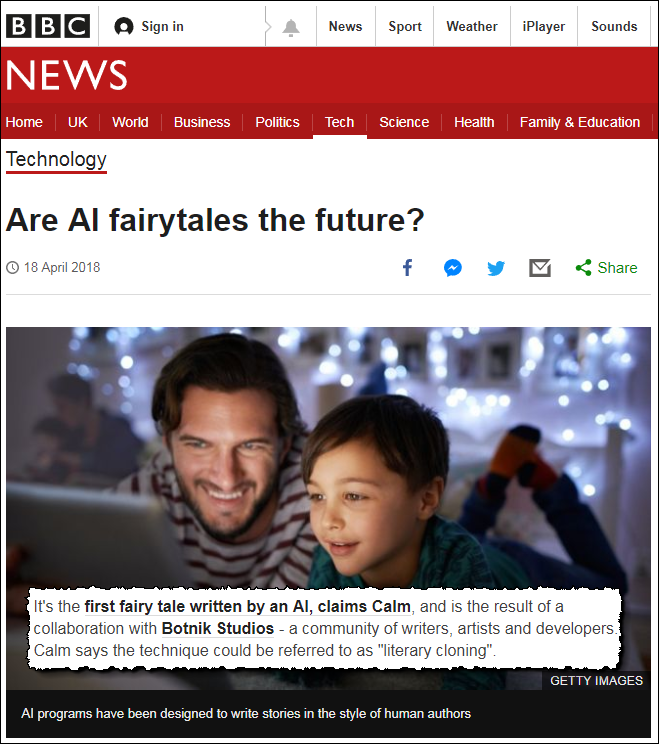 Reporter Ashley May wrote about Calm’s survey conducted by YouGov which revealed that Sunday was the night people struggled to fall asleep.

But how could they talk to people about sleep — and get in with a crowd that might be on the fence about how to actually take control of their health — without coming across like they were lecturing?

Blend together tie-ins that appeal to different audiences.

When Calm decided to continue tackling the subject of improving sleep, they opted for a mixture of nostalgia and modern day technologies. As part of their “Sleep Story” series, they created a story by using Botnik’s artificial intelligence (AI) tool that took all of the text of the brothers who wrote fairy tales such as Cinderella and then suggested words and phrases based on the information it received. From this, human writers took the words and phrases suggested by the tool and created a rough story from it.

The campaign was a huge success and received global media attention from major news sites such as BBC News in the technology news section. By using new technologies such as AI, Calm were able to reach new journalists in the tech industry who would be open to covering this new story.

“It’s definitely helpful to have a decent budget and even more valuable to have know-how and contacts but often the most important element of all is having a good idea.”

Get quirky and go a long way

While Calm has earned coverage from publications like the New York Times for their serious approach to wellness and contributions to mental health, they’re clearly not afraid to build momentum through less conventional stories.

Calm ran with addressing common sleep issues by talking about them while remaining tongue-in-cheek. They released “Baa Baa Land,” an eight-hour, slow-motion movie about sheep standing in a field. They marketed it as “the dullest movie ever made,” and “the ultimate insomnia cure.” 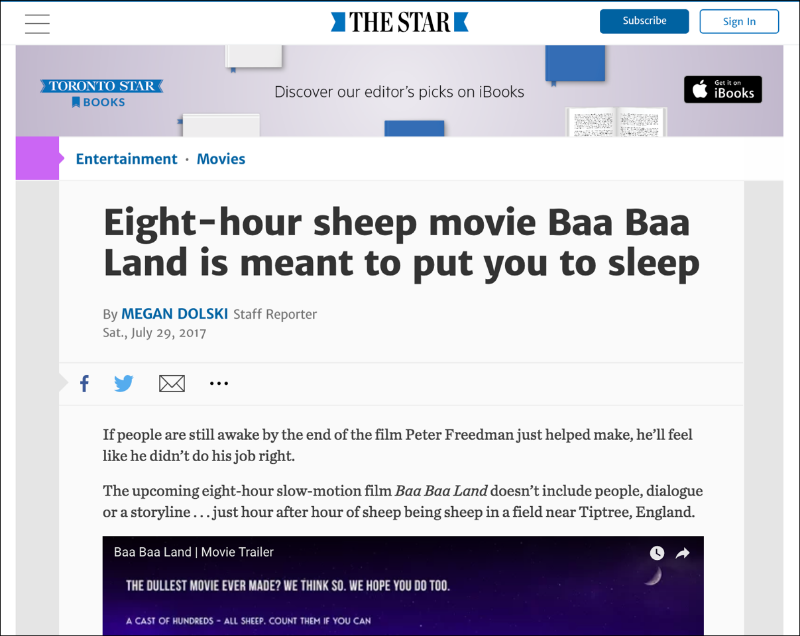 Creative thinking and being fearless in bringing topics together to tell your companies stories can get people talking about you, but it also expands your audience. Depending on the intersections between your story and other verticals, you might be able to score coverage from journalists across multiple departments.

“The quirkier, more creative ideas are sometimes that ones that resonate most and spread the farthest.”

Freedman credits a huge part of Calm’s PR success with the fact that they keep the ideas rolling.

Brainstorming sessions an important part of the weekly Calm content team schedule. But no one expects every idea to be a home run. The entire process is centred on “rolling thunder,” says Freedman. Each team member is made to feel encourage to share ideas.

Frequently, individual employees leapfrog over the others to develop big ideas that add more audiences with every layer, increasing the likelihood of coverage.

Calm have shown through their various successful campaigns that they yield better results by getting creative with their PR and not using generic techniques.

To find some inspiration for your future PR campaigns, we have a selection of articles for you to read:

She's managed content strategy at agencies as well as for clients worldwide ranging from start-ups through enterprise-level companies.