In the summer of 2014, head of web spam and the face behind Google’s search team, Matt Cutts decided to take a few months of leave for personal reasons. He then extended his leave into 2015 and then in May of that year, he was officially replaced by one unknown Googler as head of web spam. What are the reasons for this head of web spam being unknown? The unknown Googler will not have the same responsibilities as Matt such as publishing monthly videos answering search-related questions.

In light of Matt’s original announcement, Search Engine Journal asked the question, “Who Could Fill In for Matt Cutts?”. They then listed 5 potential candidates who could replace Matt, explaining their background and listing their pro’s & con’s. These candidates were  Brian White, Gary Illyes, John Mueller, Maile Ohye and Michael Wyszomierski. Nearly 2 years on from that article, I ask a different question. Can one Googler match Matt Cutts’ Twitter influence? We will use the 5 Googlers mentioned in the aforementioned article and see if one Googler can match Matt’s influence or whether it will be a collective effort.

As you can see from above, Matt and Gary share a lot of topics however John’s is a lot more varied. Whilst the majority of Matt’s and Gary’s topics are business or computer related, John is influential in topics such as politics and literature. So it is clear to see that the majority of these Googlers have a lot of high quality links going to their Twitter accounts, therefore making them influencers. However, how influential are their followers? Matt Cutts may have over 500,000 followers but how many of them have no FlowMetrics? Let’s find out…

Who follows Matt Cutts as well as the other Googlers? 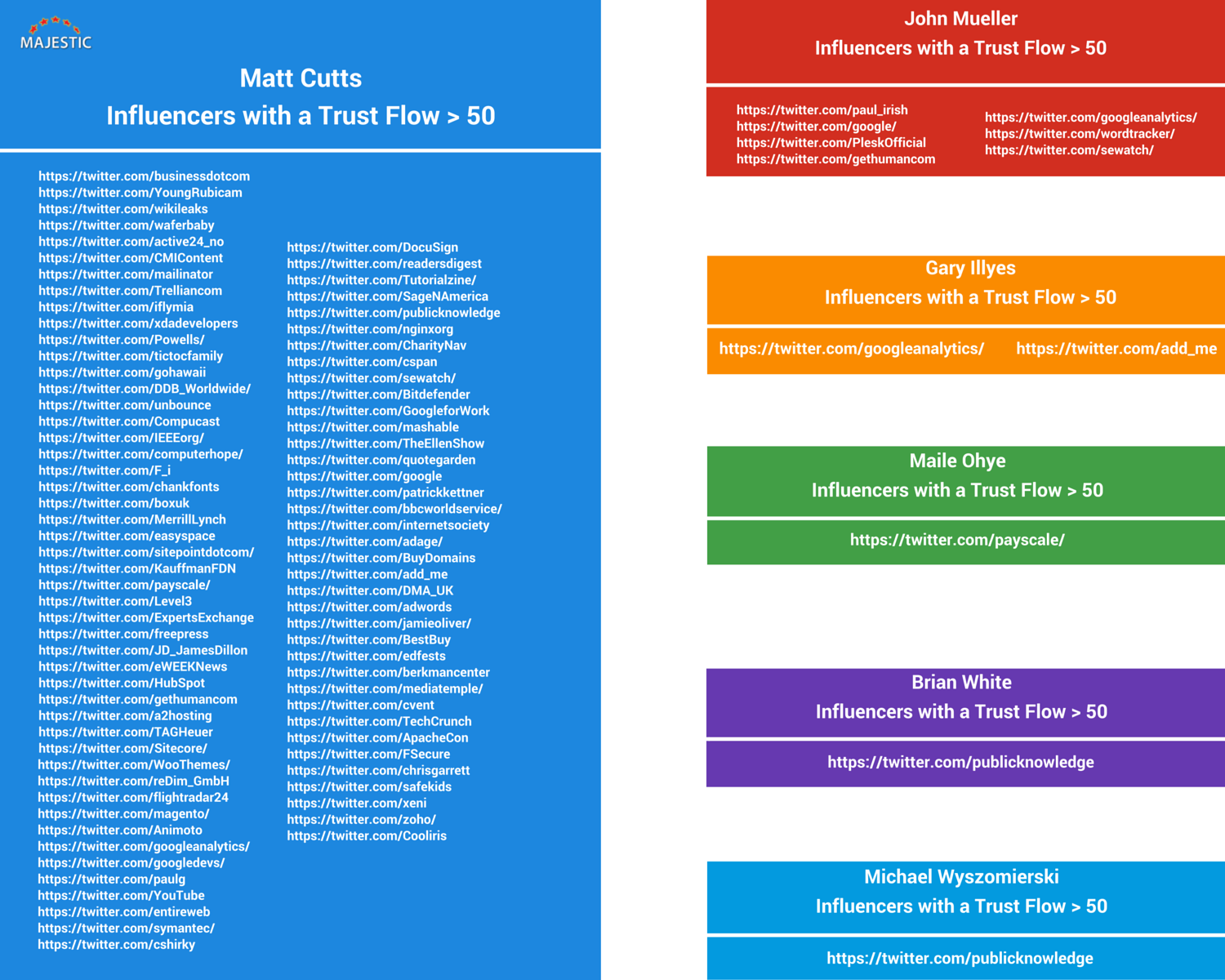 Indeed they do! Matt, John and Gary are all followed by Google Analytics whilst Brian, Matt and Michael are all followed by Public Knowledge. The only follower that Maile shares with the other Googlers is Payscale, which she shares with Matt. So, after finding out who they share their followers with, it’s time to find out Matt Cutts’ top 10 followers are. Could Google be one of them?

As a lot of Matt’s top 10 followers don’t follow the other Googlers, I thought it would be a good idea to pick out notable accounts. The first account which sprung out to me was YouTube and it is no surprise that YouTube follow Matt. This is mainly down to his presence on Google Webmaster’s YouTube Channel where he appeared on just under 200 videos in 7 years. It would not surprise me if in the near future John was also to be followed by YouTube as in the last year, his English and German hangout’s have been uploaded to the same channel. Other notable accounts who follow Matt include Paul Graham, world renowned computer scientist and also Google Developers.

To answer the question posed earlier in the article, Google’s Twitter account has a Trust Flow of 54 and subsequently becomes Matt’s 37th most influential follower.

Can any of the Googler’s mentioned in this article match Matt Cutts’ Twitter influence? No. As Gary Illyes says in this article, “There’s actually a whole team replacing Matt or that’s replaced Matt.” and subsequently, the Twitter accounts in this article will collectively replace Matt’s influence on the social media platform.