How to use Majestic to find out insightful data about Twitter – Part 2: Hashtags

Whilst it has always been on a keyboard, the hashtag was one of the lesser used keys up until a decade ago when Twitter users started to use hashtags in their tweets in order to make it easier for other users to find tweets with a specific theme or content. This was picked up by businesses that began to create hashtag campaigns in an attempt to create positive engagement or some publicity about their brand. Some campaigns have worked brilliantly like Coca Cola’s #ShareACoke whilst others like McDonald’s #McDStories weren’t so brilliant. There are numerous ways you can determine how successful a hashtag campaign was and this is normally determined by hashtag trends and how many people tweet the hashtag. It can also be determined by how many major news sites are talking about it, for better or worse. By using Majestic, you can find out a ton of insightful data about Twitter hashtags. So first of all, I will explain how you can find the data.

Firstly, head over to Site Explorer and input twitter.com into the search bar. After you have done this click on the tab titled, “Pages”. Once you are on that tab, click on export data and export the top 30,000 results to one of the following; Excel, CSV, TSV or Google Sheets.

After the data has been downloaded, you will then have a mountain of data to weave through. However, by filtering the URL column to just show “/hashtag/”, the spreadsheet will only show URL’s with hashtags. 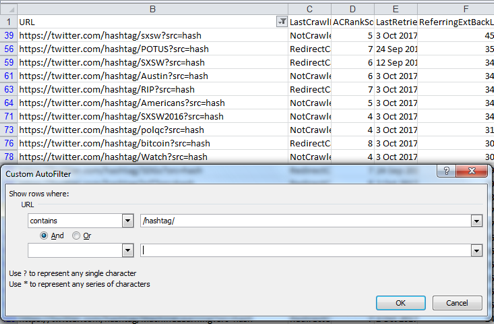 So, what do you do now? Well here are a couple of insights you can gain from this data. Firstly, you can find out what hashtags have had the most backlinks or referring domains by sorting the ReferringExtBackLinks or ReferringExtDomains columns from large to small.
Here are the top 10 hashtags with the most referring domains.

And here are the top 10 hashtags with the most backlinks.

Moving away from the spreadsheet and back to Site Explorer, I now look at analysing a specific hashtag. For this example, I’ll use the #AppleEvent hashtag which was used during Apple’s annual event in which they announced their new products. 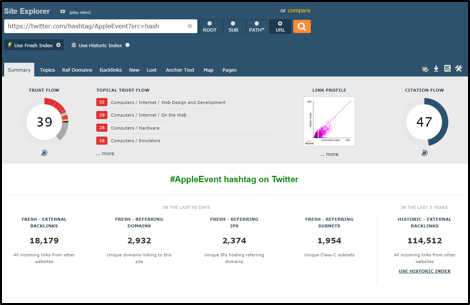 It’s no surprise to see that the websites that are linking to the hashtag are in the Computers topic as the Apple Event is one of the most talked about tech events of the year. If you scroll further down the page you can see the URL Backlink History as well as the Referring Domains history. 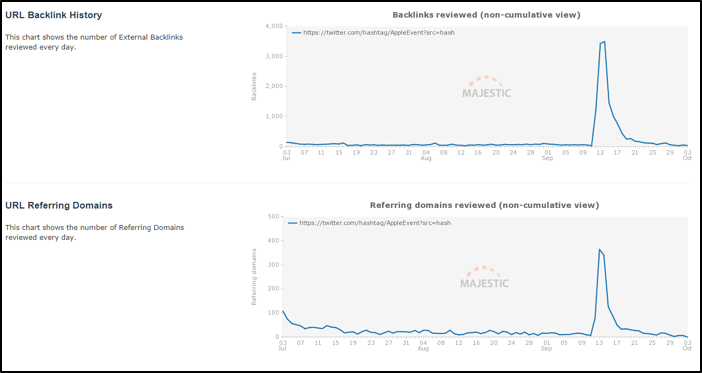 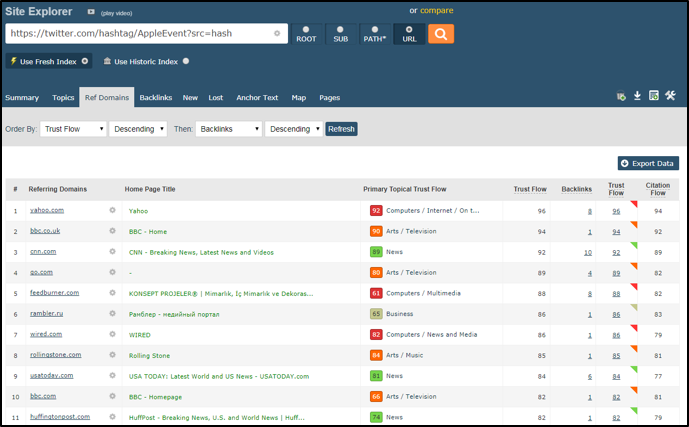